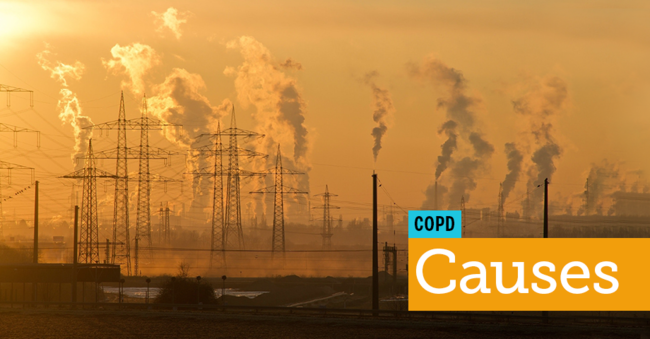 Chronic obstructive pulmonary disease (COPD) occurs when the lungs become damaged and can no longer function properly. The most common cause of damage is a history of smoking.

There are several different types of COPD. The two most common types of COPD are emphysema and chronic bronchitis, which involve different types of damage to the lungs. In emphysema, airflow is impaired due to the destruction of the alveoli (air sacs where oxygen is exchanged), making it difficult to get enough oxygen. In chronic bronchitis, airways are blocked due to inflammation of the bronchial tubes and mucus build-up, causing ongoing coughing.

The single greatest risk for COPD in the U.S. and other developed countries is a history of cigarette smoking. Smoking a pipe, cigar, or marijuana can also increase the risk of developing COPD due to the chemicals they produce. It is estimated that around 90 percent of people living with COPD currently smoke cigarettes or have smoked cigarettes in the past. Approximately 20 percent to 30 percent of smokers will develop COPD. The longer someone smokes, the higher the risk for developing COPD.

People with asthma are also at an increased risk of developing COPD, especially if they are also smokers.

People in their 40s and older are more likely to develop COPD than are younger people. COPD becomes more common with age.

Around 5 percent of people diagnosed with COPD have the genetic disorder alpha-1-antitrypsin deficiency, or alpha-1. People with alpha-1 produce a limited amount of a protein called alpha-1-antitrypsin (AAT), which helps protect the lungs. Alpha-1 can cause a form of emphysema, even without smoking. In addition to symptoms common in other forms of COPD, people with alpha-1 may experience year-round allergies and bronchiectasis, a condition wherein the walls of the airways thicken, and lung infections are common.

COPD can be caused by exposure to airborne chemicals and pollutants over a sustained period of time. Pollutants can include second-hand tobacco smoke, outdoor air pollution, dust, toxins, and smoke from poorly ventilated fires for heating or cooking. Some occupations, including mining, farming, construction, welding, and working with textiles, flour, or petroleum, have higher rates of exposure to substances that can cause COPD.

There are you just have to refine your search for them.

COPD – The Path to Diagnosis