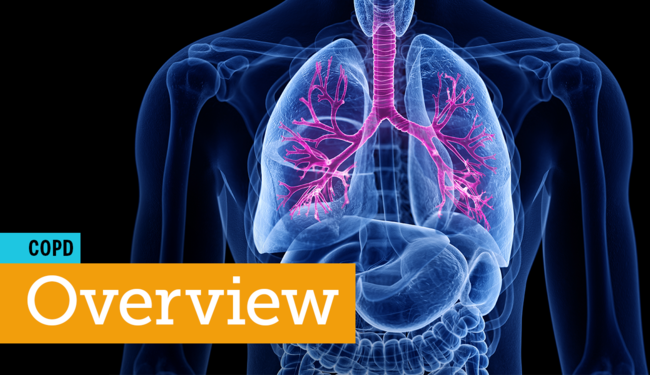 COPD, or chronic obstructive pulmonary disease, is a chronic, progressive disease in which the lungs are inflamed and do not function at full capacity. COPD can be treated, and progression can be slowed, but there is no cure. Symptoms vary among people with COPD, but trouble breathing, coughing, wheezing, tightness in the chest, and fatigue are common symptoms.

In COPD, damage to the lungs makes it difficult to breathe and take in enough oxygen. The damage caused by COPD is irreversible. In early stages, COPD symptoms can be managed, and disease progress can be slowed. In later stages of the disease, as damage progresses, symptoms become more severe and harder to manage.

COPD is a collective term referring to progressive lung disease. The most common types of COPD are chronic bronchitis and emphysema. COPD also includes refractory asthma, bronchiectasis, and alpha-1 antitrypsin deficiency (alpha-1). In cases of chronic bronchitis, airways are blocked due to inflammation of the bronchial tubes and mucus build-up, causing coughing and wheezing. With emphysema, airflow is impaired due to the destruction of the alveoli (tiny sacs in the lungs that exchange oxygen), making it difficult to breathe. People living with COPD frequently suffer from both chronic bronchitis and emphysema.

COPD develops when there is damage to the lungs. The most common cause of damage is a history of smoking. Approximately 90 percent of people living with COPD currently smoke cigarettes or have smoked cigarettes in the past. People with asthma are also at increased risk of developing COPD, as are people who have been exposed to certain chemicals and pollutants over a sustained period of time. People with the genetic disorder alpha-1 antitrypsin deficiency (alpha-1) causes some people who have never smoked or been exposed to pollutants to develop COPD and significantly raises the risk for developing COPD in people who do smoke. Read more about causes of COPD.

The History of COPD

In 1679, Swiss physician Théophile Bonet referred to “voluminous lungs,” which is thought to have been a description for emphysema.

Chronic bronchitis was identified in 1814 by English doctor Charles Badham as part of the family of COPD diseases. In the early 1800s, René Laënnec, a French physician who invented the stethoscope, wrote about COPD as a condition in which the lungs are unable to effectively release air in his Treatise of Diseases of the Chest. Smoking was less prevalent at this time, and Laënnec considered other causes such as genetics and air pollution. His work is thought to have described emphysema and chronic bronchitis.

The spirometer, which measures lung capacity, was invented by in 1846 by English surgeon John Hutchinson. The spirometer was later perfected by French physiologist Robert Tiffeneau and is still a vital diagnostic tool today.

In the 1950s, American pulmonologist Edward Gaensle, leveraging Tiffeneau’s work, published papers on air velocity index that became the basis for the forced expiratory volume (FEV) test used to diagnose COPD. In this era, antibiotics, mucus thinners, and theophylline (a compound related to caffeine, still used today) were the mainstays of COPD treatment. Oxygen supplementation and exercise were not yet recognized as effective treatments.

In the 1990s, the importance of smoking cessation and pulmonary rehabilitation were established, and inhaled bronchodilators and corticosteroids became accepted as treatment for COPD. Today, medications containing a combination of these two drug classes are taken daily as long-term maintenance treatment for COPD.

How Common Is COPD?

Approximately 24 million people in the U.S. have COPD. Not everyone with COPD has been diagnosed; it is estimated that 50 percent of those with reduced lung function may not realize they have COPD. Early warning signs such as coughing or trouble breathing are often dismissed as signs of aging, symptoms of a cold, or symptoms of other conditions. COPD is most commonly diagnosed in adults age 40 or older.

What Is the Prognosis for COPD?

In 2014, COPD was the nation’s third most common cause of death. COPD can shorten life expectancy significantly, particularly among those who still smoke cigarettes and those with later-stage COPD. Lifespan is not shortened as much in those who have stopped smoking and those with earlier stages of COPD.

Here are some examples of how COPD and smoking affect life expectancy:

Kelly Crumrin is a senior editor at MyHealthTeam and leads the creation of content that educates and empowers people with chronic illnesses. Learn more about her here. COPD is a collective term referring to chronic, progressive lung disease. Many types of lung... Chronic obstructive pulmonary disease (COPD) is classified into one of four stages depending on...

Chronic obstructive pulmonary disease (COPD) is classified into one of four stages depending on...
read article > close
ABOUT COPD TYPES DIAGNOSIS CAUSES SYMPTOMS TREATMENTS STAGES RESOURCES
New to MyCOPDTeam? Learn More
Quick Links
Q+A Treatments A-Z Resources Are you a provider? Crisis
About Us
What is MyCOPDTeam? Partner with us Terms of service Press/News Privacy policy Cookie policy
Help With This Site
Getting started FAQ Community guidelines Contact us Accessibility
© 2022 MyHealthTeam. All rights reserved.
MyCOPDTeam is not a medical referral site and does not recommend or endorse any particular Provider or medical treatment.
No information on MyCOPDTeam should be construed as medical and/or health advice.