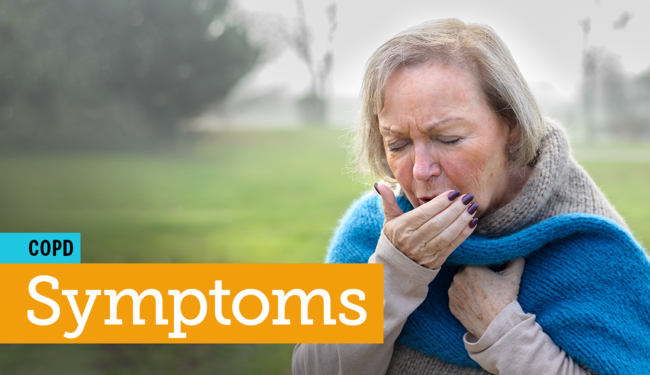 Symptoms of chronic obstructive pulmonary disease (COPD) vary in each individual and by stage of disease. In the earliest stages of COPD, symptoms may be barely noticeable or may be confused with other health conditions or changes associated with normal aging. As COPD progresses and the lungs become significantly more damaged, symptoms worsen and have a more severe impact on quality of life. During an exacerbation or flare-up, symptoms become much worse for a period of time.

Common symptoms of COPD are difficulty breathing, shortness of breath, chronic coughing, tightness in the chest, wheezing, increased mucus production, and ongoing fatigue. People who develop hypoxia, or low levels of oxygen in the blood, may have trouble thinking and remembering. Symptoms get worse over time as the lung damage progresses and may include frequent respiratory infections, swelling in the ankles, feet, and legs, and weight loss. Depression and anxiety are common with COPD, as with all chronic illnesses. It is common for people with COPD to have additional health problems such as heart failure, hypertension (high blood pressure), and diabetes, which may make COPD symptoms more severe.

Treatments can effectively manage many COPD symptoms and slow the progress of the disease.

Symptoms by Stage of COPD

People with mild COPD may or may not notice symptoms. Symptoms may be very minor such as some difficulty breathing. Many people go undiagnosed at this stage. Other early symptoms may include coughing and producing phlegm.

When COPD becomes moderate, symptoms are more pronounced and may lead people to seek a doctor’s help. Additional symptoms at this stage include shortness of breath and wheezing.

In severe COPD, quality of life is significantly impacted. People with stage 3 COPD feel increased fatigue along with worsening of other symptoms experienced in earlier stages. In later stages of COPD, some people may develop cyanosis, or a bluish tinge to the skin, due to low oxygen levels in the blood. People in later stages of COPD may experience swelling in the legs, ankles, and feet caused by pulmonary hypertension, a complication of COPD.

Symptoms by Type of COPD

Emphysema impairs airflow, making it difficult to breathe and get enough oxygen. People with emphysema may lose their appetite and experience unintended weight loss.

With chronic bronchitis, airways are blocked due to inflammation of the bronchial tubes and mucus buildup, causing ongoing coughing, frequent clearing of the throat, shortness of breath, wheezing, and chest pain. In later stages of COPD, people with chronic bronchitis are more likely to develop cyanosis.

Symptoms of refractory asthma include coughing, wheezing or whistling sounds during breathing, chest pain, and shortness of breath.

Symptoms include coughing up blood or mucus, shortness of breath, wheezing, fever and chills, and fatigue.

In addition to symptoms common in other forms of COPD, people with alpha-1 may experience year-round allergies and frequent chest infections such as pneumonia.

What Are the Early Signs of COPD?

Typically, the earliest sign of COPD is ongoing, chronic coughing. However, many people are not diagnosed until the disease has progressed and other symptoms, such as difficulty breathing and wheezing, become noticeable.

I feel your frustration. It took 5 yrs of varying diagnosis before my ENT sent me for chest x ray and pulmonary test. Thats when they diagnosed me with COPD stage 2. He could not believe none of the… read more