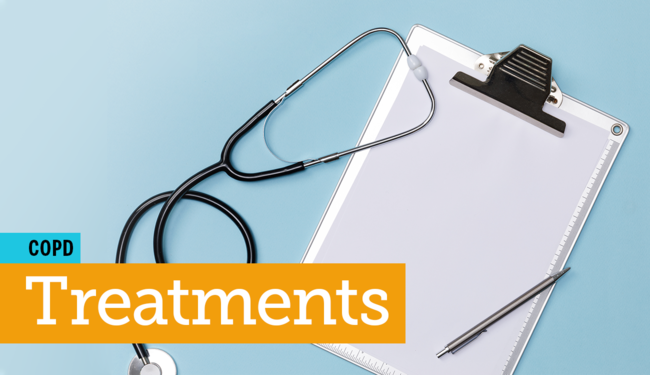 Although COPD cannot be cured, there are effective treatments that have been proven in clinical studies to improve symptoms, prevent flares, and slow the progression of the disease. Guidelines for COPD medications are based on the stage of the disease, what type of COPD you have, your age and overall health, and any other health conditions or medications that are being taken.

Studies have found that between 43 percent and 59 percent of people with COPD do not take their medications as prescribed. COPD medications are most effective when taken correctly. Stopping or underusing a medication allows the disease to flare and progress to later stages with a higher risk for complications and death. For this reason, it is important to continue taking all medications as prescribed even if you feel better. If side effects bother you, talk to your doctor about switching medications or timing them differently. Set reminders and ask for help from family if you have trouble remembering to take your COPD treatments.

Types of Treatments for COPD

The single most important thing people with COPD can do to slow the progression of the disease and the loss of lung function is to stop smoking. Medications can make it easier to breathe, help prevent flare-ups, and help stop flare-ups once they start. Surgeries can improve lung function or — in the case of lung transplants — restore it. Lifestyle changes such as exercise, improved nutrition, and completing pulmonary rehabilitation therapy can have a major impact on the quality of life.

Many people with COPD are prescribed multiple medications that work together to better control symptoms and prevent flares.

Atrovent (ipratropium), Spiriva (tiotropium), Tudorza (aclidinium), and Seebri Neohaler (glycopyrrolate) are long-acting bronchodilators from a different class of medications called anticholinergics or muscarinic antagonists. They can improve the effectiveness of other bronchodilators.

Theo-24 (theophylline) is one other type of long-acting bronchodilator.

Common side effects of bronchodilators include headache, upset stomach, jittery feeling, rapid or irregular heartbeat, and hyperactivity. Long-acting bronchodilators have been associated with increased risk for death from asthma.

Long-acting bronchodilators are typically taken in combination with a corticosteroid.

Also called glucocorticosteroids or simply steroids, corticosteroids are powerful medications that suppress immune activity and relieve inflammation. In cases of COPD, steroids decrease swelling and inflammation in the lungs, making it easier to breathe.

Steroids are commonly taken by inhaler or nebulizer on a daily basis as maintenance medications to prevent COPD flare-ups. During COPD flares, steroids may be administered at a higher dosage intravenously or taken orally. Steroids inhaled for COPD include budesonide (sold under the brand name Pulmicort) and fluticasone (sold under the brand names Arnuity Ellipta and Flovent). Rayos is a branded version of the steroid prednisone approved by the U.S. Food and Drug Administration (FDA) to be taken orally to treat COPD flares.

Corticosteroids are most commonly taken in combination with a long-acting bronchodilator.

Medications that combine a long-acting bronchodilator with a corticosteroid are among the most common maintenance drugs taken for COPD. Advair (fluticasone/salmeterol), Symbicort (budesonide/formoterol), Breo Ellipta (fluticasone/vilanterol), and Dulera (mometasone/formoterol) are a few examples.

People with the genetic disorder alpha-1-antitrypsin deficiency (alpha-1) do not make enough of a protein (alpha-1-antitrypsin, or AAT), leading to lung damage. Alpha1-proteinase inhibitors such as Aralast NP, Glassia, Prolastin-C, and Zemaira replace the missing protein, providing protection from damage.

Phosphodiesterase-4 (PDE4) inhibitors are a newer class of drugs that can help relieve swelling and inflammation in the lungs that make it difficult to breathe. Daliresp (Roflumilast) is the only PDE4 inhibitor currently approved for treating COPD.

People with COPD are susceptible to lower respiratory infections. Antibiotics may be prescribed to fight bacterial infections during flare-ups.

Mucinex (guaifenesin), available over the counter, can help thin mucus and make it easier to cough up.

People with severe cases of chronic obstructive pulmonary disease (COPD) may develop hypoxia, or low levels of oxygen in the blood. Some people with hypoxia only require oxygen therapy when they are walking, eating, sleeping, or during airline flights. Others may have resting hypoxia and need supplemental oxygen even when they are sitting still. When someone needs oxygen therapy 24 hours a day, this is known as long-term oxygen therapy (LTOT).

There are three main types of oxygen delivery devices: Oxygen-gas cylinders, oxygen concentrators, and liquid-oxygen devices. Devices differ in portability, expense, and noise. If your doctor prescribes supplemental oxygen, they will help you decide which device is right for you.

Bullectomy is a surgery to remove bullae, large air pockets that can form in lungs damaged by COPD. Bullectomy can improve lung function in some people with COPD.

Lung volume reduction surgery removes damaged portions of one or both lungs that have become overinflated due to emphysema, leaving healthier parts of the lung more room to expand.

As mentioned before, quitting smoking is vital for anyone with COPD who wants to improve symptoms, slow disease progression, and prolong life.

Even small amounts of exercise can improve symptoms and promote general health in people with any stage of chronic obstructive pulmonary disease (COPD). Fatigue and breathlessness lead many people with COPD to give up on exercise and become increasingly sedentary. Many people with COPD believe that exercise will cause their symptoms to become worse. However, the reverse is true. Physical activity can improve symptoms, while remaining sedentary exacerbates symptoms and contributes to the development of osteoporosis, heart disease, diabetes, depression, and obesity.

There is no specific diet for COPD, but many physicians and researchers studying the effects of nutrition in people with COPD recommend a diet higher in fat, protein, vegetables, and fruits and lower in carbohydrates. Limiting salt intake can help prevent swelling. Eating a nutritious diet can help you fight COPD symptoms and infections and maintain optimal health. Optimizing your nutrition will help you remain strong, fight infections and feel more energetic. Consistently eating a healthy diet and ensuring that you receive enough calories can help you breathe better and may reduce your dependence on oxygen therapy.

Some people with COPD incorporate natural treatments and report relief from certain symptoms when they use complementary or alternative treatments such as acupuncture, massage, or herbal supplements. It is important to notify your doctor of any natural treatments you use, since some can interact with medications in dangerous ways, or make them less effective. Complementary therapies should not replace prescribed medications, which have been proven effective in clinical studies.

Kelly Crumrin is a senior editor at MyHealthTeam and leads the creation of content that educates and empowers people with chronic illnesses. Learn more about her here.

Flu Shot Crucial for Those With COPD

Flu Shot Crucial for Those With COPD

© 2022 MyHealthTeam. All rights reserved.
MyCOPDTeam is not a medical referral site and does not recommend or endorse any particular Provider or medical treatment.
No information on MyCOPDTeam should be construed as medical and/or health advice.