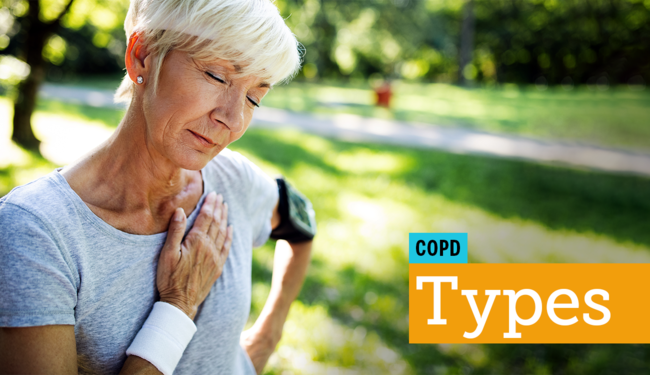 COPD is a collective term referring to chronic, progressive lung disease. Many types of lung disease that cause airway obstruction fall under the umbrella of COPD. The most common types of COPD are chronic bronchitis and emphysema. It is common to have more than one type of COPD.

Emphysema is most commonly caused by smoking but may also be caused by the genetic disorder alpha-1 antitrypsin deficiency, or alpha-1. In emphysema, the walls between the alveoli (tiny air sacs where oxygen is exchanged) are destroyed, causing the sacs to become larger and larger. Air becomes trapped inside the lungs, and it is difficult to breathe. Emphysema makes it difficult to exchange carbon dioxide for oxygen.

Chronic bronchitis is caused by irritation to the lungs, which may include smoking, air pollution – including second-hand smoke – and recurring lung infections. In chronic bronchitis, the airways respond to irritation by becoming inflamed and producing mucus. The airways become blocked, causing shortness of breath, coughing up phlegm, wheezing, and chest pains.

Alpha-1 is a genetic disorder that limits the amount of a protein (alpha-1-antitrypsin, or AAT) that helps protect the lungs. People with alpha-1 do not produce enough AAT, resulting in lung damage similar to that in emphysema. Alpha-1 can cause COPD to develop even in people who have never smoked, and it increases the risk for COPD in people who have smoked. Alpha-1 is the cause of COPD in approximately 5 percent of those diagnosed. In addition to symptoms common in other forms of COPD, people with alpha-1 may experience year-round allergies and bronchiectasis. Alpha-1 can also cause liver disease and panniculitis, an inflammation of the fatty layer of the skin. Most people with alpha-1 are diagnosed after lung disease develops, around the age of 30 or 40, or when liver disease develops, around age 40.

Refractory means stubborn or unmanageable. Refractory asthma is a severe form of asthma that is non-reversible, meaning that medications are ineffective in treating it. Asthma may be caused by allergies or triggers such as exercise, cold air, or stress. Asthma causes inflammation and narrowing of the airways. Many doctors consider refractory asthma as separate from but closely related to COPD. Estimates indicate that as many as 40 percent of people diagnosed with COPD also have asthma. In addition, asthma is considered a risk factor for developing COPD. Symptoms of refractory asthma include coughing, wheezing, and shortness of breath.

In bronchiectasis, airways become scarred, inflamed, and filled with phlegm. Bronchiectasis is a separate disease from COPD, but the two can have such similar symptoms that doctors sometimes mistake one for the other. It is possible to have both conditions; in fact, bronchiectasis can develop in people living with COPD. Bronchiectasis has been linked to other chronic conditions including Crohn’s disease, ulcerative colitis, and rheumatoid arthritis. Symptoms include coughing up blood or mucus, shortness of breath, wheezing and fatigue.

Is the prognosis different depending on which type of COPD I have?
Prognosis differs more by stage of COPD than by type. Any type of COPD has a worse prognosis at later stages. Taking your medication every day and making lifestyle changes such as stopping smoking and completing a pulmonary rehabilitation program can make a big difference in slowing the progress of COPD.

Can you die from COPD?
In 2014, COPD was the nation’s third most common cause of death. COPD can shorten life expectancy significantly, particularly among those who still smoke cigarettes and those with later-stage COPD. Lifespan is not shortened as much in those who have stopped smoking and those with earlier stages of COPD.

Kelly Crumrin is a senior editor at MyHealthTeams and leads the creation of content that educates and empowers people with chronic illnesses. Learn more about her here.
hug (30) like (83) comment (47)
sign up to view previous comments 1 of 47

It’s devastating to hear that you have COPD.
Try not to be depressed because medicines can help keep you healthy.

COPD - The Path to Diagnosis

Emphysema symptoms are not usually noticeable until 50 percent of a person’s lung tissue has...

Emphysema symptoms are not usually noticeable until 50 percent of a person’s lung tissue has...
read article >