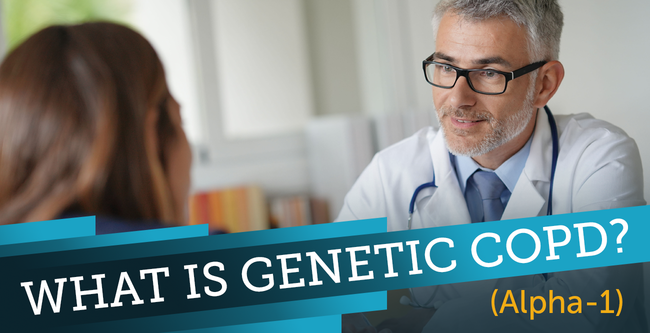 Alpha-1-antitrypsin protein deficiency, also known as AATD or alpha-1, is a genetic disorder that runs in families. An estimated 90 percent of those with alpha-1 do not know they have it. For those who seek medical care for symptoms, it often takes years to arrive at the correct diagnosis of alpha-1. Its symptoms are easily mistaken for other conditions, and alpha-1 is often misdiagnosed.

Since alpha-1 causes lung damage that often leads to chronic obstructive pulmonary disease (COPD), it is sometimes referred to as genetic COPD. Problems with lung function are often an early symptom of alpha-1 and may lead doctors to order lung function tests. However, doctors cannot diagnose alpha-1 based on symptoms or a medical exam. Diagnosing genetic COPD requires a simple blood test to check for the genetic mutation that causes alpha-1-antitrypsin deficiency.

What Is Alpha-1-Antitrypsin Deficiency?

Alpha-1 disrupts the production of alpha-1-antitrypsin (AAT), a key protective protein. When someone is deficient in AAT, it leaves the body susceptible to damage and disease, especially in the lungs and the liver.

Alpha-1 is incurable. The good news is that AATD is manageable and treatable, especially if diagnosed early. The damage to lung tissue, the liver, and the blood vessels that service them accumulates over time. Early intervention can prevent irreversible organ damage.

A mutation on the SERPINA1 gene causes a deficiency of the alpha-1-antitrypsin (AAT) protein. AAT is a serine protease inhibitor (serpin) produced in the liver. AAT is released into the blood and travels to the lungs, where it blocks the breakdown of lung tissue by a protein (neutrophil elastase) that white blood cells produce when the lung is exposed to toxins and irritants. A genetic mutation in people with alpha-1 disrupts production of AAT. The alpha-1 mutation results in insufficient levels of AAT either being produced or entering circulation. Absent or deficient AAT can impact liver function and leave the lungs without protection from toxins.

COPD is one of the leading causes of death in America. Approximately 15 million to 16 million people are living with types of COPD, such as chronic bronchitis, emphysema, and bronchiectasis. As many as 10 percent of people with COPD also have AAT deficiency, and up to 2 percent have severe alpha-1.

These figures are likely even higher since both COPD and alpha-1 often go undiagnosed. Scientists believe as many as 95 percent of people with alpha-1 do not know they have it. It’s estimated that half of all people with COPD are undiagnosed or unaware they have the condition. One study found that an alpha-1 diagnosis took an average of 5.5 to 8.3 years. During these years-long delays, irreversible damage can accumulate, and alpha-1 symptoms can worsen.

Noticeable signs of alpha-1-related lung problems aren’t usually present until adulthood. Symptoms usually appear between ages 20 and 50. Because wheezing is a common symptom and alpha-1-related lung conditions may respond well to asthma treatment, alpha-1 is commonly mistaken for asthma.

Alpha-1 makes the lungs more susceptible to respiratory illness, irritation, and inflammation. The lungs of someone with alpha-1 are also more sensitive to environmental irritants and toxins. People with alpha-1 are at increased risk for COPD that starts earlier in life and progresses swiftly. People without alphal-1, even those who have smoked for years, usually don’t develop COPD until they’re well over 60 years old. People with alpha-1 tend to experience COPD at a much younger age, around 30 or 40.

Alpha-1 and Other Health Conditions

AAT deficiency can affect the liver and skin, as well as the lungs.

People with alpha-1 have a 30 percent to 40 percent chance of developing liver disease, especially after age 50. Liver disease is the second most common condition linked to alpha-1. Liver disease includes active or chronic hepatitis or cirrhosis, and a type of liver cancer called hepatocellular carcinoma. Alpha-1 can cause excess amounts of AAT to build up in the liver. Symptoms of liver problems can develop in infants, children, or adults with alpha-1.

Alpha-1 effects and symptoms vary, and the severity of resulting liver disease does too. Some people with alpha-1 won’t experience liver issues at all; some will have severe liver problems.

Alpha-1 is the leading genetic cause of pediatric liver disease and liver transplant surgery in children. About 1 in 20 infants and children with alpha-1 will get liver disease. Jaundice, recognizable by the characteristic yellow eyes and skin color it causes, is a common symptom. Other signs of alpha-1 related to liver disease in infancy are abdominal swelling, enlarged liver, and slow growth.

In children and teens, alpha-1 may look like poor appetite, liver dysfunction, and low energy. Symptoms of alpha-1 related liver disease in adults include bruising or bleeding easily, jaundice, fatigue, nausea, loss of appetite, and diarrhea. Fifteen percent of people with alpha-1 develop cirrhosis, scarring of the liver.

More often than not, children and adults with alpha-1 have no symptoms of liver disease. This variability is one of the reasons genetic COPD is challenging to diagnose.

Panniculitis starts as small, hard, inflamed lesions under the skin — mostly on the torso, arms, and legs. If the lesions deepen and become ulcerative, the condition is known as necrotizing panniculitis. Panniculitis can also cause fevers.

Who Is at Risk for Alpha-1?

Alpha-1 is a very rare disease, although it is thought to be underrecognized and underdiagnosed. Around 100,000 people in the United States and 125,000 people in Europe have alpha-1. Alpha-1 genetic COPD is considered a late-onset condition, as it is usually diagnosed in older people. Genetic COPD can affect people of all ages, genders, and ethnicities. Alpha-1 is more common among people of European ancestry, and a person is more likely to have it if they have a family history of the disorder — especially in first-degree relatives like siblings, parents, or children.

If you have COPD, there’s a chance you may have alpha-1. Regardless of your age and whether or not you smoke, it is recommended that you be tested for alpha-1.

Alpha-1 affects men and women equally, but there is evidence that it takes between two and four years longer for women to receive a diagnosis of alpha-1. COPD has long been considered a condition of older men. Today, COPD is more prevalent in women than in men. A large gender discrepancy exists in COPD diagnosis, risk, and death. In fact, the number of women diagnosed with COPD has quadrupled in the last 20 years.

In July 2016, the COPD Foundation issued a set of guidelines around alpha-1 treatment that includes recommendations for screening and testing. Those who are diagnosed with alpha-1 may be encouraged to receive genetic counseling.

Catching the early symptoms of alpha-1 and confirming a diagnosis means starting treatment sooner, reducing irreversible damage, and slowing disease progression. To reduce diagnostic delays, the clinical practice guidelines from the COPD Foundation encourage people with a high risk for AATD to be screened. Those at high risk for genetic COPD include:

How Is Alpha-1 Treated?

The primary treatment goal for alpha-1 is usually slowing disease progression. The clinical guidelines for alpha-1 recommend people start combating the condition as soon as possible after they’re diagnosed. There are a variety of treatments for the symptoms and effects of alpha-1.

Managing alpha-1 largely consists of controlling and minimizing its symptoms and treating any related conditions. For instance, genetic COPD might call for supplementary oxygen. In severe cases of alpha-1, a liver transplant may be necessary. Many treatments for genetic COPD are the same as those used to treat other types of COPD.

Some medications used in treating alpha-1 include:

Most lung surgeries aren’t used to treat alpha-1. However, in severe cases, a partial or full lung transplant may be necessary.

Pulmonary rehabilitation (PR) is a customized therapy program of exercise and education. PR is designed to improve overall lung functionality and capacity. It also better enables a person to exercise independently, which can greatly improve quality of life. PR may also improve alpha-1 treatment outcomes.

The most important action you can take if you have alpha-1 is to stop smoking and avoid secondhand smoke. Smoking (including tobacco products, nicotine replacements, and other inhalants) increases the risk of developing or worsening COPD. Smoking also exacerbates the symptoms of alpha-1 and hastens disease progress. Exercise and proper nutrition are also recommended as part of a holistic treatment plan for alpha-1.

Read more about treatments for COPD.

Nyaka Mwanza has worked with large global health nonprofits focused on improving health outcomes for women and children. Learn more about her here.