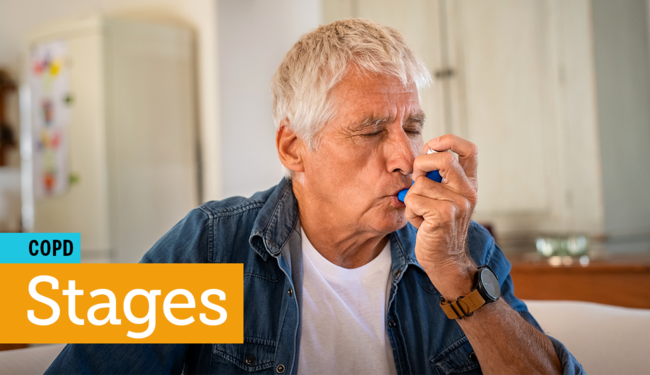 Chronic obstructive pulmonary disease (COPD) is classified into one of four stages depending on test results that show the extent of damage to the lungs. Finding out the stage of COPD is important because it helps the doctor decide which treatments will be most effective. Knowing the stage at diagnosis also helps the doctor track how the disease is progressing as time goes on and whether treatments need to be changed.

There are two main approaches for diagnosing stages of COPD.

The Global Initiative for Chronic Obstructive Lung Disease (GOLD) system is based on only one measurement — forced expiratory volume (FEV1), which assesses the amount of air exhaled through a spirometer in a one-second interval. FEV1 compares your score to the score of a person similar in age, gender, and size with normal, healthy lungs to express a percentage of lung function.

The BODE Index takes several measurements into account in an effort to assess the impact of COPD on your life and predict estimated life expectancy. In the BODE approach, the doctor measures body mass index (BMI), pulmonary function, oxygen levels, and performance on a six-minute walking test. Learn more about tests used to diagnose COPD.

What Are the Stages of COPD?

Depending on test results, you will be diagnosed with stage 1, 2, 3, or 4. Later stages have more severe symptoms and lower quality of life.

Stage 1 COPD is mild. Many people in stage 1 do not realize they have COPD. The most common symptoms are a cough with phlegm. According to the GOLD system, people with stage 1 COPD usually have approximately 80 percent of normal lung function.

Stage 2 COPD is moderate. People are more likely to see their doctor at this stage due to increased cough and phlegm production. Most people start taking medication at this stage. Based on the GOLD system, people with stage 2 COPD usually have 50 percent to 70 percent of normal lung function.

Stage 3 COPD is severe. At this stage, most people have trouble breathing and feel extreme fatigue. COPD begins to impact the quality of life and make daily activities difficult. Additional medications become necessary. The GOLD system defines stage 3 as having 30 percent to 49 percent of normal lung function.

Stage 4, or end-stage COPD, is very severe. In end-stage COPD, most people have trouble getting enough oxygen. Quality of life is significantly impacted, and flare-ups can be life-threatening. Oxygen therapy usually becomes necessary. As expressed by the GOLD system, stage 4 COPD includes those with less than 30 percent of normal lung function remaining.

Sounds alot like me too...So far I'm just using oxygen when I sleep along with my C-Pap machine for Sleep Apnea but don't need it through the Day yet!✌

posted about 14 hours ago