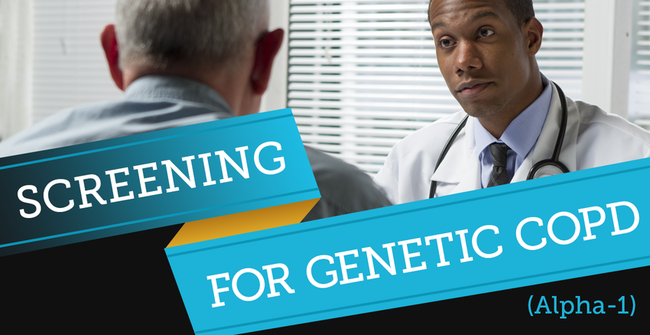 What Is Alpha-1-Antitrypsin Deficiency?

Alpha-1-antitrypsin deficiency, also called alpha-1, AATD, or genetic COPD, is an inherited genetic disorder that affects between 80,000 and 100,000 people living in the United States, according to the American Lung Association. Those who have inherited this condition have an abnormal gene from at least one parent. When a deficiency is present, there’s an imbalance between the protein alpha-1-antitrypsin (AAT) and the enzyme elastase. Alpha-1-antitrypsin is a protein produced in the liver that works in the lungs to protect against damage. In people with alpha-1-antitrypsin deficiency, AAT builds up in the liver and doesn’t function to protect the lungs. Alpha-1 can also cause a scarred liver (cirrhosis) and affect the heart.

According to the National Human Genome Research Institute, alpha-1-antitrypsin deficiency affects 1 out of every 2,500 individuals. Alpha-1 occurs in all ethnic groups, but it is most prevalent in those of European ancestry. Cincinnati Children’s Hospital reports that alpha-1 is the most common genetic disease that leads to liver transplant in children.

Who Should Be Screened for Alpha-1?

The Global Initiative for Chronic Obstructive Lung Disease and the World Health Organization (WHO) suggest that every person diagnosed with chronic obstructive pulmonary disease (COPD) should be screened for alpha-1. WHO adds the recommendation that people with adult-onset asthma should be screened as well.

COPD is typically diagnosed after age 45, and is often considered to be a disease found in older people. However, alpha-1-antitrypsin deficiency can affect people of all ages. Children might need to be screened if they have unexplained liver disease, asthma that can’t be resolved with bronchodilators, or a sibling with alpha-1. Smokers with AAT deficiency can start to see warning signs as young as age 20, according to the American Lung Association.

In perhaps the broadest standards for alpha-1 screening recommendations, the American Thoracic Society and the European Respiratory Society jointly recommend testing for those who have:

All of these conditions or risk factors can point to the possibility of having alpha-1. Even if you do not have the deficiency yourself, you may find out you are a genetic carrier.

What Does Alpha-1 Screening Involve?

Based on your medical and family history, your health care provider can order an alpha-1-antitrypsin deficiency test. Alpha-1 screening is as quick and simple as a cheek swab done at home or a blood draw in your doctor’s office or a nearby diagnostic laboratory.

You will usually get your alpha-1 test results back within a week to 10 days. If advanced testing is needed to confirm the diagnosis, results are usually delivered within 10 to 14 days.

Testing for alpha-1-antitrypsin deficiency may be performed to screen asymptomatic people or families or to diagnose those showing symptoms of the condition. The Alpha-1 Foundation recommends that alpha-1 screening include:

If you or a family member carries the gene for alpha-1, screening and genetic counseling may be recommended for other relatives as well.

If I’m Feeling OK, Why Would I Want the Test?

It is impossible to know whether you have alpha-1 based on symptoms alone. You may feel fine now, but damage from alpha-1 is progressive.

In a video produced by The France Foundation, pulmonologist Robert Sandhaus addressed the difficulty of identifying those with AATD based on symptoms. “There’s nothing specific about the symptoms that patients get,” explained Dr. Sandhaus, who founded the Alpha-1 Antitrypsin Deficiency Program at National Jewish Health. “They can have the same exact symptoms as someone with smoking-related COPD. They can have the same liver disease that alcoholics get — cirrhosis. The characteristics of alpha-1 are such that there are no clinical diagnoses. It’s a laboratory diagnosis.”

While a diagnosis of alpha-1-antitrypsin deficiency can’t provide a cure, it can help you treat your symptoms, maintain your quality of life, and manage serious complications caused by alpha-1 — including cirrhosis, heart disease, and lung failure.

“It’s so important to identify an alpha-1 patient as soon as possible,” said Dr. Sandhaus. “If you don’t identify an individual that has alpha-1 antitrypsin deficiency until their lung disease is severe, even effective therapy will simply keep them at that severe level. The delay in diagnosis for alpha-1-antitrypsin deficiency is one of our major problems, because delay means liver injury, more lung injury.”

Knowing your diagnosis will also help you make educated decisions about occupational and lifestyle considerations to help maintain your quality of life and take steps to protect the lungs and liver.

Protect your lungs by:

Protect your liver by:

If it is determined that you have alpha-1 genes, family testing is recommended so everyone can make informed decisions about their health and lifestyle.

Support After an Alpha-1 Diagnosis

A diagnosis of alpha-1-antitrypsin deficiency may lead to more questions: What is like to live with this genetic condition? How can I manage my symptoms? How can I support my family members with alpha-1? What might my future look like?

More than 2,000 members of MyCOPDTeam report that they have been diagnosed with alpha-1. When you join, you gain a community of people living with the same condition and challenges you face. Members support each other and provide answers based on their own experiences.

Have you been screened for alpha-1? Has your doctor recommended you be screened? Comment below or post on MyCOPDTeam.

Mary K. Talbot is a graduate of Providence College (Rhode Island) and the Medill School of Journalism at Northwestern University (Illinois). Learn more about her here.
hug (5) like (27) comment (26)
sign up to view previous comments 1 of 26

What is Genetic COPD (Alpha-1)?

Emphysema symptoms are not usually noticeable until 50 percent of a person’s lung tissue has...

Emphysema symptoms are not usually noticeable until 50 percent of a person’s lung tissue has...
read article >