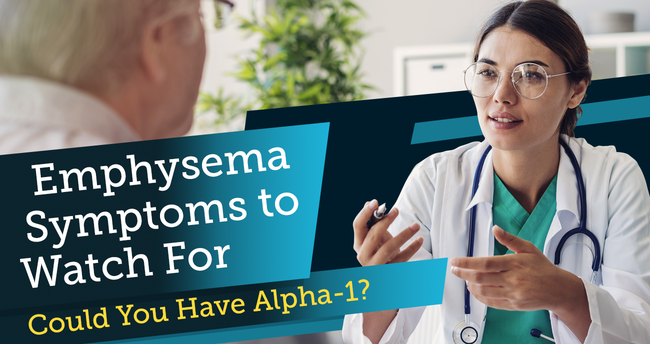 Emphysema is a lung disease that occurs when the air sacs in the lungs (alveoli) are damaged. Over time, emphysema reduces the surface area of the lungs that is available to exchange air, which can decrease the amount of oxygen that reaches the bloodstream. As a result, people with emphysema experience shortness of breath.

In mild forms of the disease, a person may experience a gradual development of shortness of breath and fatigue, both of which are common symptoms of other diseases. Some people may also attribute these warning signs to aging or being out of shape.

Emphysema is usually diagnosed between ages 40 and 60. However, people with alpha-1 antitrypsin deficiency (sometimes called AATD, genetic COPD, or just “alpha-1”) may notice symptoms of emphysema or other lung disease earlier — usually between ages 20 and 50. Alpha-1 is a genetic condition that raises an individual’s risk of lung and liver disease.

It’s important to understand the early symptoms of emphysema so you know what to look out for, as well as when it may be time to visit your doctor.

It’s possible to live with emphysema for years without noticing any signs or symptoms of the disease.

The main symptom of emphysema, shortness of breath, usually develops gradually. Because of this, you may begin to avoid activities that cause you to become short of breath, so the symptom doesn’t become noticeable or problematic until it starts interfering with your daily life.

Emphysema may only cause occasional shortness of breath and fatigue in the beginning. But the early stages of emphysema may also present several other symptoms, including coughing, chest tightness, sleep problems, and anxiety.

Emphysema can cause the lungs to produce excess mucus (sputum). You may have a productive (wet) cough, which occurs as a result of the body’s attempt to rid the lungs of this mucus. Additionally, most people with emphysema also have chronic bronchitis (long-term inflammation of the lungs’ bronchial tubes). Chronic bronchitis also leads to persistent coughing.

This is accompanied by an ongoing feeling that you are not getting enough airflow.

Frequent wheezing is caused by blockages in the airways. You may also hear a whistling or squeaky sound when you breathe.

Other Symptoms of Emphysema

There are other symptoms of emphysema that are less directly related to the respiratory process, including anxiety, depression, and fatigue.

Chest tightness is a common symptom of emphysema. Chronic chest pain and tension can lead to difficulty breathing. Chest tightness can be distressing, as it can cause symptoms similar to those of an anxiety attack or panic attack.

Fatigue is considered the main extrapulmonary (non-lung-related) symptom of COPD. People with COPD describe fatigue as a general feeling of exhaustion and being drained of energy. It’s also associated with frustration, depression, and problems concentrating.

Sleep problems and general feelings of sleepiness are common in people with COPD. The symptoms of COPD, such as chest pain, coughing, and frequent nighttime urination, can make it hard to get a good night’s rest. Certain medications used to treat emphysema may also cause insomnia (the inability to fall or stay asleep) or daytime sleepiness.

People with COPD use more energy when breathing and burn 10 times more calories doing so than those without lung disease. Because of this, an estimated 40 percent to 70 percent of people with COPD experience unintended weight loss.

Some people may develop emphysema — or their emphysema may be worsened — as a result of their genes. Alpha-1 antitrypsin deficiency is a genetic condition that raises an individual’s risk of developing lung and liver disease.

This can cause symptoms that include:

Alpha-1 antitrypsin deficiency goes undiagnosed in nearly 90 percent of people who have it, and researchers believe it is not recognized in many people with COPD. You can find out if you have alpha-1 through blood tests and genetic screening.

Signs That Emphysema Is Progressing

In most people, emphysema progresses slowly as the disease destroys lung tissues over time. In many cases, it is not diagnosed for years — until more than half of the lung’s air sacs are damaged.

As emphysema progresses, its symptoms become more severe. Increasing shortness of breath, coughing, and chest tightness are all signs that emphysema is progressing.

You should seek immediate medical attention if any of the following symptoms arise:

The Global Initiative for Chronic Obstructive Lung Disease (GOLD) System classifies COPD into different stages, depending on the severity of disease. Disease severity and lung capacity is determined in part by forced expiratory volume (FEV1), which measures how much air a person can exhale for one second after taking a breath.

Stage 1 COPD is mild and a person has a FEV1 of 80 percent or greater. A person is likely not yet experiencing any symptoms of emphysema.

In stage 2, a person has 50 percent to 80 percent of their normal lung capacity as measured by FEV1. They may experience symptoms like shortness of breath, a chronic cough, and excess mucus.

People with stage 3 COPD have a FEV1 of 30 percent to 50 percent and experience symptoms of severe emphysema like a chronic cough. It is often a challenge to exercise or complete day-to-day tasks, and one may regularly feel tired or sick.

Stage 4 is considered very severe and may also be called end-stage COPD. This stage can be identified in two cases: when a person has less than 30 percent of their lung capacity or when a person has stage 3 emphysema as well as low blood oxygen levels.

People with end-stage disease experience severe symptoms of emphysema that impact their everyday life. Aside from severe shortness of breath, a person with severe emphysema may experience difficulty walking or eating, confusion or memory loss (due to oxygen deprivation), frequent lung infections, or chronic respiratory failure — which occurs when the respiratory system can’t take in sufficient oxygen or release enough carbon dioxide.

Regular checkups can help you and your doctor keep track of disease progression and develop ways to improve your health and maintain your quality of life. You should always let your doctor know if you experience any new or worsening emphysema symptoms.

MyCOPDTeam is the social network for people living with COPD, including emphysema. Here, more than 114,000 members come together to offer advice, lend support, and share their stories.

Have you been diagnosed with emphysema? What symptoms have you experienced, and how have they changed? Share your experience in the comments below or start a conversation on MyCOPDTeam.

Max Mugambi is a copywriter at MyHealthTeam with more than five years of experience writing about a diverse range of subjects. Learn more about him here.

Aminah Wali, Ph.D. received her doctorate in genetics and molecular biology from the University of North Carolina at Chapel Hill. Learn more about her here. Symptoms of chronic obstructive pulmonary disease (COPD) vary in each individual and by stage of...

Symptoms of chronic obstructive pulmonary disease (COPD) vary in each individual and by stage of...
read article > Managing COPD symptoms are challenging for many of our members. Many members have figured out how...

Managing COPD symptoms are challenging for many of our members. Many members have figured out how...
read article > When you have COPD, breathing takes effort - and that can cause fatigue. “Fatique is my major...

When you have COPD, breathing takes effort - and that can cause fatigue. “Fatique is my major...
read article > Receiving a diagnosis of COPD can inspire both relief and dread. It can be a relief to have a...

Receiving a diagnosis of COPD can inspire both relief and dread. It can be a relief to have a...
read article > by Stephen Gaudet I’m talking about the A-word…. ANXIETY As a respiratory therapist and a...

by Stephen Gaudet I’m talking about the A-word…. ANXIETY As a respiratory therapist and a...
read article > © 2023 MyHealthTeam. All rights reserved.
MyCOPDTeam is not a medical referral site and does not recommend or endorse any particular provider or medical treatment.
No information on MyCOPDTeam should be construed as medical and/or health advice.
×

MyCOPDTeam
Add to your home screen
×

below and then 'Add to Home Screen'